The Wonderful and Delightful K.A. Young has announced that The Third book in The Elise Michaels Series will be coming out February 2015. I am here to help you get all the info you need to be ready for Blood Moon. 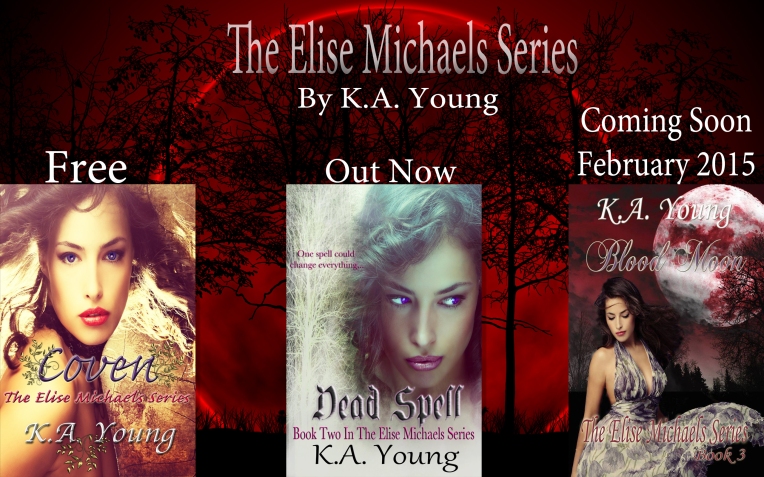 Coven – FREE
Elise Michaels’ motto has always been: no guts, no glory. She is a thrill seeker, continually craving excitement and adventure. The idea of being tied down to a place or man never interested her, even though a betrothal spell was cast linking her and the Head of Council’s son when they were mere infants.
Being a distant third in succession to assume the Head Mistress role, she felt confident that her secret would remain in her past along with Coven life. Unfortunately, nothing in our fun loving heroine’s future is anything she or anyone from the supernatural realm is prepared for.
Now, she’s forced to return to the place and the Sorcerer she so desperately sought to forget.
Elise has no idea the power and gifts that await her. Can she let go of her own desires and embrace her new role? Or will she surrender to the faceless evil coming for them all?
Book one in the tantalizing Elise Michaels Series a spinoff of The Nephilim Warrior Series.
http://tinyurl.com/US-Amazon-Covenhttp://tinyurl.com/UK-Amazon-Covenhttp://tinyurl.com/Nook-US-Covenhttp://tinyurl.com/Nook-UK-Covenhttp://tinyurl.com/iBooks-Coven
Dead Spell – $2.99
After being forced to live among the humans, Elise finds herself on the cusp of a war that she isn’t sure how to fight let alone win. Along with a small supernatural group of sorcerers, werewolves, vampires and one Nephilim warrior, she is prepared to risk it all in order to protect and defend the world that they know and love.
While Elise has that one goal in mind, she is also learning to adjust to the gift her mother sent her from the other side, her wolf. And if all that weren’t enough, she must also choose between the affections of the head sorcerer Garrett, and the sexy alpha wolf Enrique. One thing’s for sure, Elise has no intention of being coerced into a relationship neither by loyalty nor a supernatural bond.
Elise never would have imaged that everything would come to a head because of one witches spell. One spell could change everything…….
http://tinyurl.com/DeadSpell-US-amazon
http://tinyurl.com/DeadSpell-UK-Amazon
http://tinyurl.com/DeadSpell-US-Nook
http://tinyurl.com/DeadSpell-UK-Nook
http://tinyurl.com/DeadSpell-iBooks
Blood Moon- Coming February 2015
It’s easy to fight for what you believe in. Elise Michaels walked away from the exciting life as a paired sorceress to the last female warrior to live a life for the Coven she had once despised and hasn’t looked back. She’s accepted her wolf, a gift from her mother and now has become part of a pack.
Elise Michaels would do anything to save the ones she loves. As the most powerful Sorceress of her time, she’s already fought and defeated deadly attacks from the human alliance seeking to expose and destroy the supernatural world.Now a new war has been exposed and the only way Elise can defeat this deadly force of evil is to bond herself to the powerful Sorcerer Garrett Hayes, but even their fiery bond is tested by betrayal.
The line between friend and foe is blurred and an alliance with the wolves now comes with a price. On the cusp of the Blood Moon, an epic battle against dark forces will cause Elise to decide what her and her ward Mona’s ultimate survival is worth.
For more information about K.A. Young and her Books, you can follow her on Facebook, or on her Blog.
at January 07, 2015