A Review Of AS I AM by Annalisa Grant 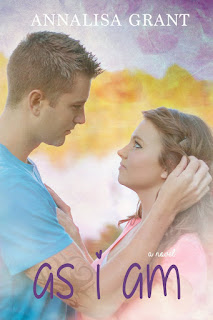 “You’re not invisible. You’re invaluable.”
When Kinley Carmichael looks in the mirror, she doesn’t see her blonde-haired, blue-eyed, size 4 twin sister. She sees her dark-haired, brown-eyed, size 12 self.
Kinley and her twin sister Addison are excited to start their second summer as counselors at The Camp at Lake Hollis. All Kinley wants is to earn enough money to meet up with her mother so they travel the world as professional photographers. All Addison wants is to work on her tan, seduce a boy, and build her fashion budget. And while Kinley and Addison couldn’t be more opposite, nothing has ever stopped them from being the best of friends.
It’s an especially great summer for Kinley as the official camp photographer with Notre Dame Quarterback Cal Harper showing interest in her. But when artist Miller Conrad arrives and rejects Addison’s advances, showing more interest in Kinley, true colors will shine and the sisters’ bond will be tested.
As Kinley and Miller’s connection deepens, Kinley feels like she can truly be herself without the internal scrutiny she’s developed in the shadow of her sister. But when Kinley inadvertently uncovers a terrible secret, Miller is left facing the demons of his own reasons for coming to Lake Hollis.

What was supposed to be the greatest summer of Kinley’s life turns out to be more life-changing than she ever imagined.

Annalisa Grant sets this world up we are all too familiar with. Being uncomfortable within our skins.
Young Love, First love, sister love, and self-love. Where do we draw a line, where do we jump?

I can't personally say I totally relate to this story. For one reason, I never been to a summer camp. With the "Chatter" that Kinley has been dealing with, I can relate to. I was lucky enough to  find a person who has helped silence that "chatter".

I Love how Annalisa Grant  portrayed that a sisterly bond, how it can be tested, and a realistic outcome to the "test".

I was very pleased with the flow of this book, and the writing.  I would highly recommend to anyone who enjoys young adult, contemporary romance  and coming of age stories.

AnnaLisa is the youngest of four children and the only daughter, born and raised in Fort Lauderdale, Florida. After graduating high school, she moved to Charlotte, NC with her parents. This turned out to be a blessing since it was just a few short years later that she met her husband in the Film Actor’s Studio of Charlotte. As she studied acting at the Studio, AnnaLisa was in several films and made-for-TV movies, as well as performed in local theater in both dramatic and musical roles. At one time, it was AnnaLisa’s dream to be a professional singer.

AnnaLisa completed her undergraduate degree in Human Services at Wingate University and her Master’s degree in Counseling from Gordon-Conwell Theological Seminary. During her thirteen years in the Human Services field, AnnaLisa worked with children in group homes and foster care, and spent two years in private practice counseling individuals, families, and couples.

When her father was in a near fatal car accident in 2010, AnnaLisa’s best coping skill turned out to be writing. Five months after the accident, when all the what ifs would not go away, AnnaLisa started writing Layla Weston’s story in The Lake. She had no idea what she was going to do with the story. In fact, she wrote sixty-four pages before she told her husband what she was doing. By then it was clear that Layla had a long story to tell and there were multiple books on the horizon.

In 2013, after all three YA novels in The Lake Trilogy were written and she had let them sit long enough, AnnaLisa took matters into her own hands and self-published the titles within just a few months of each other. Received well by readers young and not-so-young alike, The Lake Trilogy has enjoyed breakout success, selling close to half-million copies the first year.

AnnaLisa’s publicist is Rick Miles of Red Coat PR, and she is represented by Italia Gandolfo of GH Literary. AnnaLisa has been married to her super awesome husband Donavan since 2001 and lives in Matthews, NC with their two ridiculously beautiful children.

Email ThisBlogThis!Share to TwitterShare to FacebookShare to Pinterest
Labels: Amazon, Annalisa Grant, As I AM, five stars, Kindle, love, Netgalley, Review, romance, YA