(Reviewed) Somewhere Within by Amy Hale 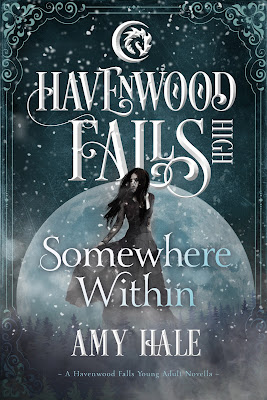 Welcome to Havenwood Falls, a small town in the majestic mountains of Colorado. A town where legacies began centuries ago, bloodlines run deep, and dark secrets abound. A town where nobody is what you think, where truths pose as lies, and where myths blend with reality. A place where everyone has a story. Including the high schoolers. This is only but one…

With her raven-black hair, porcelain-white skin, and shy demeanor, Zoey Mills has been the target of bullies since childhood, no matter how many times her family moved. She expects nothing to change when they relocate to Havenwood Falls, her parents’ hometown. What she doesn’t expect is to discover that she inherited her eccentricities—as the next generation of a long line of frost dragons.
As she learns to accept she’s on the cusp of becoming a shifter, she finds out her new best friend isn’t human, either. But the boy Zoey’s fallen for is, earning the disapproval of her grandfather and patriarch and fueling the fire of a decades-long feud among her extended family. Elitism and prejudice take on whole new meanings. While she wants to trust her instincts and follow her heart, Zoey discovers that hiding who she really is and playing by the rules would make life a lot simpler. But simple doesn’t mean easy. She must find her strength somewhere within and embrace her destiny—or risk losing everyone she cares about. And all of this on the eve of her Sweet Sixteen. This is a Young Adult paranormal romance in the Havenwood Falls High series of Young Adult fantasy stories featuring a variety of supernatural creatures. The series is a collaborative effort by multiple authors. Each book is generally a stand-alone so you can read them in any order, although some authors will be writing sequels to their own stories. Please be aware when you choose your next read.

Other books in the Havenwood Falls High YA series:
Written in the Stars by Kallie Ross
Reawakened by Morgan Wylie
The Fall by Kristen Yard
Books are released on a monthly basis. Coming soon are stories by Michele G. Miller, Cameo Renae, AnnaLisa Grant, J.L. Weil, and more.
Immerse yourself in the world of Havenwood Falls and stay up to date on news and announcements at www.HavenwoodFalls.com. Join our reader group, Havenwood Falls Book Club, on Facebook at https://www.facebook.com/groups/HavenwoodFallsBookClub/

Novellas are a tricky thing. You either get extra information on characters already established. Or you're left feeling like you missed the bigger picture.

I have been a fan of Amy Hale's work for a while. While I would have loved more stage time for these characters, I think she did an amazing job of getting this non-teenager to relate to a Teenaged dragon. I can't wait to see what else comes from Amy's imagination.
at November 13, 2017