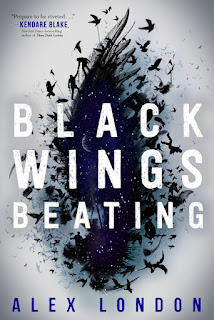 Black Wings Beating has a nice even pace in the beginning, as you get to know the setting and meet the multiple characters around Brysen and Kylee. Meeting all these characters are not overwhelming at all. Alex London has a gift of introducing each one, with enough backstory that you can keep them straight in your head as they come and go through the story.

Kylee is ready to leave the family business, she just wants to pay off the debt that her father had racked up. Brysen is content to continue doing what he is doing, with Dymain by his side.

As their reluctant adventure takes off, each is faced with some truths about themselves and each other. But they are not alone on this, Nyall has joined them giving them strength in friendship and numbers. Let us not forget Jowyn, without him things would not be as they are.

As mention before, Alex London has a beautiful gift for writing, and I highly recommend Black Wings Beating.  I know I have already added it to the readers in my family.

**Special Note: I was not going to put in my review that Brysen sets on this adventure for Love, not the love of his sister, but for his love for Dymain I felt that you could get that for the book’s blurb. Also, I felt that his love for the same sex had no real bearings on Brysen. It did not seem like this love was frowned upon, within the pages, as it should not be frowned upon today. It was as it needed to be. If this is not something you be able to handle, then I highly suggest taking a deep breath and giving the book a try. It might just surprise you.

The people of Uztar have long looked to the sky with hope and wonder. Nothing in their world is more revered than the birds of prey and no one more honored than the falconers who call them to their fists.
Brysen strives to be a great falconer—while his twin sister, Kylee, rejects her ancient gifts for the sport and wishes to be free of falconry. She’s nearly made it out, too, but a war is rolling toward their home in the Six Villages, and no bird or falconer will be safe.
Together the twins must journey into the treacherous mountains to trap the Ghost Eagle, the greatest of the Uztari birds and a solitary killer. Brysen goes for the boy he loves and the glory he's long craved, and Kylee to atone for her past and to protect her brother's future. But both are hunted by those who seek one thing: power.
In this first young-adult fantasy novel in a trilogy, Alex London launches a soaring saga about the memories that haunt us, the histories that hunt us, and the bonds of blood between us.
at September 10, 2020