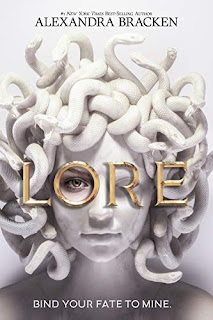 Lore by Alexandra Bracken
Publisher: Disney Hyperion (January 5, 2021)
Year Published: 2021
Genre: Young Adult, Greek Mythology, Fantasy
Started: November 25th
Finished: December 28th
Rating: A+/5 Stars
Seriously when you look at this cover, it screams butt-kicking heroine!
A Gorgon! Medusa in all her glory! This cover alone would be putting in my request to get my hands on Reader's Copy.
I was given a copy through Netgalley for my honest opinion. Here comes my honest opinion. GET THE BOOK!
Lore is a girl, who grew up knowing she was destined for something great, and all that was taken from her. As we follow Lore and her crew, we find out what happened on the worse night of her life. Who is playing who? Who will come out the victor?
I think my favorite part of this book, was when Lore called out a goddess on her B.S. For favoritism for the other sex. Her punishments she doled out, to those who should have been protected. Her reply to it all.
Lore is an entertaining read, I highly recommend reading it at any age. My Youngest teenager is looking forward to the audiobook when it releases.

Every seven years, the Agon begins. As punishment for a past rebellion, nine Greek gods are forced to walk the earth as mortals, hunted by the descendants of ancient bloodlines, all eager to kill a god and seize their divine power and immortality.
Long ago, Lore Perseous fled that brutal world in the wake of her family's sadistic murder by a rival line, turning her back on the hunt's promises of eternal glory. For years she's pushed away any thought of revenge against the man--now a god--responsible for their deaths.
Yet as the next hunt dawns over New York City, two participants seek out her help: Castor, a childhood friend of Lore believed long dead, and a gravely wounded Athena, among the last of the original gods.
The goddess offers an alliance against their mutual enemy and, at last, a way for Lore to leave the Agon behind forever. But Lore's decision to bind her fate to Athena's and rejoin the hunt will come at a deadly cost--and still may not be enough to stop the rise of a new god with the power to bring humanity to its knees.
at December 28, 2020