When you can't really compare book to movie.... 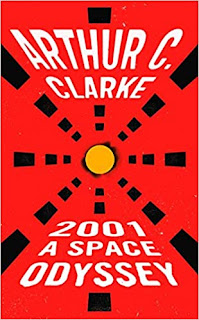 It was very interesting to see how different two different styles are seen in this story. As one prepared the novel and the other prepared the movie. I want to say more, but at the same time, if you have read/seen one and not the other, I feel like anything I say would be a spoil to either.

As I enjoyed both movie and book at the time, I wouldn't actually put them on a must watch/read list. Though I would recommend at least reading the book if you felt you couldn't get over Kubricks visions, and I would recommend watching the movie, for the art of it all. Comparing the book and the movie would be like comparing a meal to the recipe. Just not really fair to the one who is eating the meal itself.

This is a journey the reader would have to go on themselves. I haven't got a feel for Clarke's writing style as of yet. It could be how the book was created at the time. This is a very interesting story on its own.  I am looking forward to reading the other 3 titles of his that made it on my 100 sci-fi books to read.