Insidious by Victoria Evers
My rating: 5 of 5 stars

** I was given an ARC for an HONEST Review**

I was contacted to read and review Insidious. I was given the blurb, to the book, I glanced at the blurb, pop over to Goodreads, and took a look at the cover. Without knowing much more than AWESOME cover Design, Title that made me go OHHH, and or course my favorite genre! I went in as blind as I could.

Ms. Evers didn't disappoint at all. I am in love! I need the second book right now! I laughed out loud, I snorted! I stayed up past my bedtime reading! Some awesome twist and turns in this book! I highly recommended it to teenagers and adults alike. If you're looking for the next paranormal read this is the one!

“That’d be easy if it was her. I’m public enemy number one. Hunted like Dillinger and loathed like a Kardashian.”


As always I have two different reviews. The one that hits all sites that is clean and to the point and the nitty and gritty off the cuff review that is here. If you're still reading this, that means you're wanting the nitty gritty low down >:)


“People are acting like clubbed a baby seal using a freaking panda.” 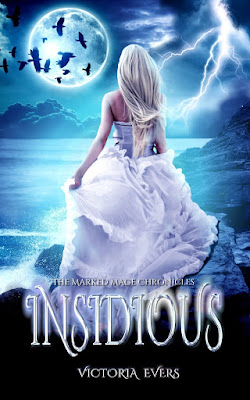 All Kat Montgomery wanted was a fun night out on the town. What she got was a death warrant. As it turns out, the quaint little hamlet of Mystic Harbor, Maine houses more than sandy beaches and adorable B&B’s. Beneath the New England charm rests a deadly world where shifters, demons, vampires, and angelic hunters all vie for power.

A world where magic is the greatest weapon.
Magic that Kat now possesses.
After that one fateful night, she can feel the changes beginning to take hold of her. Only problem, she doesn’t even know what she’s turning into. With threats hiding in plain sight, deciphering the lines between friend and foe is nearly impossible. As if things couldn’t get any worse, Kat learns her only real ally rests in the one person she can’t stand: Reese Blackburn, an insufferably handsome magician whom the town fears most.


Kat’s very soul is at stake, and destiny doesn't seem to be playing out in her favor. Can these two unlikely partners challenge fate itself before it's too late?

“Don’t Threaten Me With A Good Time”


Ms. Evers reached out to me, asking if I would be interested in reading and reviewing her book Insidious. With one look at the title and a brief scan of the blurb she has sent me, I pop over to Goodreads with the link she provided. I was sold, I really like the cover.

I Know, I know! You're not to judge a book by it's cover. Though come on, how many of you haven't bought a book just based on the cover or title. I like to go in as blind about a book and author as I can. This way I have no preconditioning book snobbery hindering me from enjoying a book.

The Prologue had me going umm... it switches POV's so fast I wasn't sure what I was reading.
I was a bit scared, I wasn't sure what the hell I got myself into. Before I knew it, I forgot all about the craziness of the prologue and was totally into the story. Within the  first three chapters I had my favorite people and the ones I loathed. I enjoyed the character Kat a lot. Of course, this is a YA paranormal read, so we have to tropes! YAY TROPES!
But this love Triangle is a bit lopsided, You have the EX- Boyfriend, the Golden Boy and the PITA. (PAIN IN THE ASS)
I can't give you much more than that. If I give you any dirt on these three guys I am totally giving the the story away. Though I fell for the PITA right away. He had me in stitches, though it could've been that he would of been part of my crowd in High School.

As I’ve already  mentioned the prologue, there were other hiccups in the book. This could because I was reading a non polish version, or a formatting issue. Normally these would of knock off a star for me. Here is the kicker, they were small and Ms. Evers writing style is just top notch that I forgot about them two sentence later, it never took me truly out of the story. If you pointed a hellhound at me and ask me to point them out, I wouldn't be able to. I just know they were in there somewhere but not enough for me to remember where or really take a star away from it.

Upon finishing the book, I did some sleuthing. I learned that this is Ms. Evers first book! HOLY BATMAN BALLS! I had assumed that this might be her second series. It was that well put together, you really don't see something like this in the indie community right away. I am totally blown away, and I can't wait to see what happens in this series and any other series Ms. Ever writes.

I highly recommend this book to anyone who enjoys Young Adult Paranormal Reads, and can enjoy tropes for the awesomeness that they are!

“Bite me”
“I probably shouldn’t. Wouldn’t want to get rabies”
“I beg to differ. Foaming at the mouth would probably be an improvement for you. Anything to get you to stop talking.”
He smirked. “Touche, Princess.”

VICTORIA EVERS is a debut paranormal fiction writer who feels really awkward referring to herself in the third person.... When she's not vacationing in Narnia, you’ll probably find her reading, watching horror movies, spending time with her AMAZING family, or daydreaming about the newest story in her head. For upcoming book releases, personal insights, bonus material, and additional information, stay tuned to her blog as she navigates the world of self-publishing!
Blog: http://victoriaevers.blogspot.com/


You can also find her at: https://twitter.com/victoria_evers 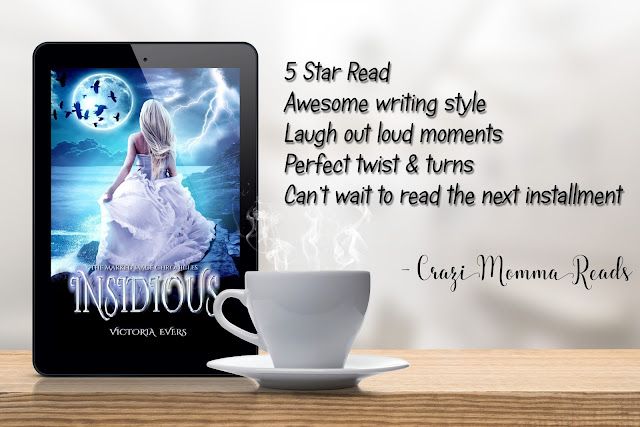