Freebie of the Day: Burning Through Gravity Series by Addison Moore 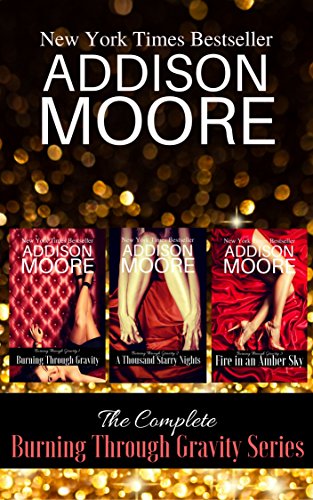 The Complete Burning Though Gravity Series
Genre: Romance
Author: Addison Moore
*Free at the time of this post*

Free with a Kindle Unlimited Subscription

He's gorgeous and obnoxious—the exact one-night stand I need on, this, the final night of my life. *The complete BURNING THROUGH GRAVITY Series!BURNING THROUGH GRAVITY—they soared so high so fast they never expected the fall. Two beautiful souls. Two seemingly innocent deceptions. Once they meet, Stevie and Ford explode into one another in a ball of lust, hotter than a July moon. Ford is assertive, dominate and in control, that is until Stevie brings him to his knees. He thinks she’s the most beautiful woman he’s ever met both inside and out. Stevie thinks he’s sweet, and sort of goofy—of course it doesn’t hurt that he drips sex like honey. Stevie is starting to fall hard for Ford. And Ford is all in with Stevie. She wonders if he could ever forgive her for what she’s about to do. She wonders if she wants him to. They say love conquers all. But love never met two liars like Stevie and Ford. His lie cost her a few sleepless nights. Her lie will cost him everything.A THOUSAND STARRY NIGHTS (Burning Through Gravity 2)For as long as I can remember I have wanted Aspen as my wife. The day I lost her, I could hardly stand to breathe. I want her back in the worst way. I don’t take losing very well. Aspen will be mine again. I need to have her. And I will.Aspen… Carter is back in my life. Long ago, we flew so close to the sun we were scorched by the twisted labyrinth of our own making. And now, here he is again, front and center, as if nothing ever happened. I doubt Carter and I stand a chance. In fact, I believe we were doomed right from the start. Carter is driven to Aspen. Aspen is determined to stay away from Carter. When their hearts collide once again, their love burns brighter than A Thousand Starry Nights.FIRE IN AN AMBER SKY (Burning Through Gravity 3)I don’t do redheads, I don’t do virgins, and I don’t do anyone related to the Cannons. Period.Lincoln’s story… When Macy O’Conner shows up in my office with those long legs, and wild crimson hair, I can’t look away. Usually when I use the service, and ask for a girl, they know what kind of woman to send me, and Macy is on the no-fly list. I crossed redheads off a long time ago, and I don’t plan on going down that path again. But Macy isn’t letting up. She’s eager to learn and has me pegged as her teacher. No commitment. No strings. But now she wants more. She’s curious about what’s lurking beneath these walls of mine. She’s asking questions I’m not ready to answer. Macy might think she’s toying with me, but she’s playing with fire. I should never have fallen for her. Now I’m willing to burn everything down around us just to get her back. Macy is his worst nightmare. She has one hell of a surprise. Lincoln will never see it coming.