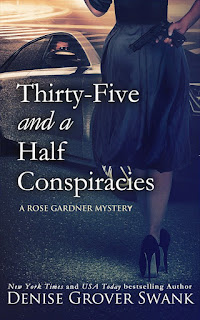 Thirty-Five and a Half Conspiracies
Rose Gardner Mystery, Book 8
by Denise Grover Swank

Rose Gardner has survived plenty of close scrapes in the past, but her latest bit of trouble has landed her in the Fenton County holding cell on trumped up charges. The most powerful man in southern Arkansas, J.R. Simmons, is determined to put her behind bars for good and destroy everything she holds dear, including her boyfriend, Mason, and her friend Skeeter, reigning king of the Fenton County crime world. In a stunning betrayal, it seems as if J.R.’s son, Rose’s ex-boyfriend, might have turned tail and joined his father.

But Rose doesn’t have to face this fight alone. Her tight-knit group of friends is dedicated to helping her figure out—and foil—J.R.’s plan for ruining her, Mason, and Skeeter. But even with their support and the use of her special power, Rose is at a disadvantage. J.R. is a criminal mastermind who has been using his money, power, and web of influence to hide his conspiracies for years. How can she hope to find solid evidence implicating someone who’s mastered the art of not getting caught?
Time is running out, and soon Rose realizes that reassuming her role of the Lady in Black might be her only chance at ferreting out the evidence that will save them all. In so doing, she will risk not only her life, but the possibility that her secret identity will be unveiled to all.

Twenty-Eight and a Half Wishes (Book One) is FREE.

New York Times and USA Today bestselling author Denise Grover Swank was born in Kansas City, Missouri and lived in the area until she was nineteen. Then she became a nomadic gypsy, living in five cities, four states and ten houses over the course of ten years before she moved back to her roots. She speaks English and smattering of Spanish and Chinese which she learned through an intensive Nick Jr. immersion period. Her hobbies include witty Facebook comments (in own her mind) and dancing in her kitchen with her children. (Quite badly if you believe her offspring.) Hidden talents include the gift of justification and the ability to drink massive amounts of caffeine and still fall asleep within two minutes. Her lack of the sense of smell allows her to perform many unspeakable tasks. She has six children and hasn’t lost her sanity.
Or so she leads you to believe.